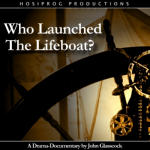 Who Launched The Lifeboat?

For how was it that someone living in Dumnow in the heart of the Essex countryside and miles from the sea came to have a vital part to play in the invention and development of the Lifeboat as we know it today?

As John Glascock reveals in this drama-documentary, there were three main rivals after the claim of inventor of the lifeboat, and the building of the first lifeboats had come about only after an eighteenth century tale of dubious dealing and heavy political skullduggery in smoke filled rooms.

Narration by Angela Neville and Pat O'Gorman
Along with the help and assistance of
The Royal National Lifeboat Institution (RNLI)
Robin Sharp, formerly of the RNLI
Stuart Jones of the Port of Lowestoft Research Society
South Tyneside Central Library
Tyne & Wear Museums
And Members of the Essex Hospital Radio Players
With Production and Audio Realisation by Dennis Rookard

Written and Produced by John Glasscock.