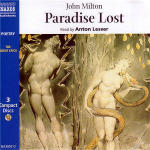 Of Man's First Disobedience, and the Fruit
Of that Forbidden Tree, whose mortal taste
Brought Death into the World, and all our woe...'

Paradise Lost is the greatest epic poem in the English language. In words remarkable for their richness of rhythm and imagery, Milton tells the story of Man's creation, fall and redemption - to "justify the ways of God to men".

Milton produced characters which have become embedded in the consciousness of English literature - the frail, human pair, Adam and Eve; the terrible cohort of fallen angels; and Satan, tragic and heroic in his unremitting quest for revenge.

The tale unfolds from the aftermath of the great battle between good and evil to the moving departure of Adam and Eve from Eden, with human and eternal anguish intertwined in magnificent resonance.