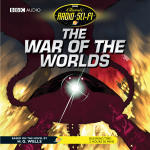 War Of The Worlds, The

When a Martian spacecraft lands on Woking Common, mankind is terrorised by aliens in tall, armoured capsules which stalk the countryside on three legs.

The machines wreak havoc on London and the Southern Counties, and survivors are driven underground.

Scientist John Nicholson (Paul Daneman) tells how he was plunged into a paralysing nightmare of stark terror, savage madness and utter destruction.