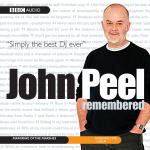 The BBC Radio 4 serialisation of Margrave of the Marshes, read by Michael Angelis and Carolyn Pickles.

Not many people manage to achieve the status of legend in their own lifetime, and even fewer deserve that status. John Peel was one such, whose contribution to British culture is undeniable. His 40-year career on Radio I and Radio 4 reached a huge and diverse audience, and he influenced the musical tastes of millions.

In 2004 he started his autobiography, but his sudden death in October the same year left the manuscript unfinished. Completed by his wife Sheila, it was called Margrave of the Marshes, a title John often thought he would like if he were ever to be ennobled. This BBC Radio 4 serialisation of the book is brought vividly to life by Michael Angelis and Carolyn Pickles, and paints a fascinating portrait of the life of a broadcasting Icon.

Guaranteed to appeal to all John Peel's many devoted fans, this download is a perfect reminder of the genius of a man many regarded as the best ever DJ.

He was born in Heswall, near Liverpool, and educated at Shrewsbury School. After completing his military service, he went to the United States where he worked for a cotton producer and an insurance company before getting a job with Dallas radio station WRR. When the Beatles became popular in the States, his Liverpool accent led to him becoming the official Beatles correspondent for rival Dallas station KLIF. He stayed in America for five years, returning to Britain in 1967.

Back in the UK, he worked for the pirate station Radio London, where he hosted a programme called The Perfumed Garden in the midnight to 2am slot. There, he used his extensive knowledge of the American underground scene to play an eclectic mix of classic blues, folk music and his favourite West Coast bands such as The Doors and Jefferson Airplane. His personal, confessional style of presentation was a huge hit with the listeners, who sent him letters, poems and even records from their own collections.

He joined Radio I at its launch in 1967, and again hosted a late-night programme called Top Gear until 1975. Subsequently, his programmes were simply known as the John Peel shows. Continuing the tradition he established at Radio London, he built his reputation on playing unusual, obscure and avant-garde music, and was one of the first DJs to expose punk, reggae and hip-hop to a mainstream audience. His enthusiasm for new music led to him playing the entirety of Tubular Bells, an entire side of a Cocteau Twins album, and putting Teenage Kicks by The Undertones on twice. In addition, he was the first DJ to play The Sex Pistols' God Save the Queen and Bob Dylan's Desire. Many bands credit John Peel with launching their career, including The Undertones, The Cure, Pulp and The White Stripes. His Radio I shows were also notable for The John Peel Sessions, usually four tracks pre-recorded in the studio. Many of these have been released on record, largely by the Strange Fruit label.

John Peel married Sheila in 1974, and they had four children. Married life mellowed him somewhat, so when BBC Radio 4 launched a programme about family life called HomeTruths in 1998, John Peel was chosen to present it. An idiosyncratic, charming, magazine-style show, based around listeners' phone-ins, letters and interviews, it quickly became an institution and won Peel a whole new fan base.

As well as radio broadcasting, John Peel also appeared on television, regularly presenting Top of the Pops, voicing documentaries such as Life of Grime and contributing to Grumpy Old Men. In 1998 he was awarded an QBE, and in 2003 was inducted into the Radio Academy's Hall of Fame.

He died of a heart attack in 2004, while on holiday with Sheila in Cuzco, Peru.