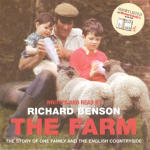 After two hundred years of farming in Yorkshire, the Benson family were forced to sell up. They found - like so many other farmers - that big business was wiping out a way of life they had known for generations.

Farming had not come naturally to Richard Benson - he had fled to London long ago. But when he returned to help, he found himself caught up in memories of his childhood in the countryside. Recalling a lost world of pigs digging up the neighbour's lawn, love affairs among haystacks and men who wrestled bulls to prove a point, he tells of the changing English landscape, of the people affected - and of how his family adapt.

" A delight, superb. An engaging, tender and uplifting story of a family and its struggle to eke a living from the land "

" Brilliant, powerful, moved me to tears "

Richard Benson was born on a small farm near Doncaster in 1966. After a childhood spent crashing tractors and being outwitted by various farmyard animals, he left home to become a journalist, and has since written for various newspapers and magazines. The Farm is his first book and became an overnight success when it was shortlisted by Richard & Judy's Book Club.