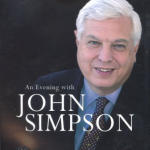 Evening With John Simpson, An

In a career spanning more than 35 years, John Simpson, the BBC's World Affairs Editor, has reported from more than 100 different countries and 30 war zones. He has twice been the Royal Television Society's Journalist of the Year.

In this compelling live recording he recalls some of the difficult and often dangerous situations he has faced as a reporter and tells the extraordinary story of how he survived a bomb attack by an American plane in Iraq.

He also talks about the famous occasion when he 'liberated' Kabul after the Afghan War and reveals why Saddam Hussein and Osama Bin
Laden both wanted to have him killed.