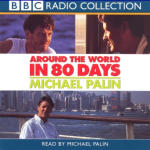 Around the World in 80 Days

In the autumn of 1988 Michael Palin set out from the Reform Club with an ambitious plan: to circumnavigate the world, following the route taken by Jules Verne's fictional hero Phileas Fogg 115 years earlier.

The rules were simple. He had to make the journey in eighty days using only forms of transport that would have been available to Fogg. And so, complete with visas, running shoes, an inflatable globe and sound advice from Alan Whicker , Michael Palin began his incredible journey.

Crossing seventeen borders and meeting innumerable challenges, he saw Venice from the back of a rubbish barge, rode around the Pyramids on a camel called Michael, and was attacked by a cockatoo in Hong Kong - these amongst many other adventures.

Phileas Fogg may have brought a Princess back from his travels, but Michael Palin brought back a fascinating and frequently humorous account of the journey of a lifetime.