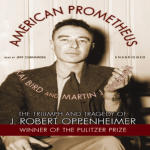 American Prometheus: The Triumph and Tragedy of J. Robert Oppenheimer

"[A] profoundly fascinating, richly complex, and ineffably sad American
life.Bird and Sherwin are without peerin capturing the humanity of the man...."
--Booklist (starred review)

"The definitive biography.Oppenheimer's life doesn't influence us. It haunts us."
--Newsweek

"A masterful account of Oppenheimer's rise and fall, set in the context of the turbulent
decades of America's own transformation. It is a tour de force."
--Los Angeles Times Book Review

"A work of voluminous scholarship and lucid insight, unifying its multifaceted portrait
with a keen grasp of Oppenheimer's essential nature.It succeeds in deeply fathoming
his most damaging, self-contradictory behavior."--New York Times

Winner of the 2006 Pulitzer Prize for Biography

J. Robert Oppenheimer is one of the iconic figures of the twentieth century, a brilliant
physicist who led the effort to build the atomic bomb for his country in a time of war
and who later found himself confronting the moral consequences of scientific progress.

When he proposed international controls over atomic materials, opposed the development
of the hydrogen bomb, and criticized plans for a nuclear war, his ideas were anathema to
powerful advocates of a massive nuclear buildup during the anti-Communist hysteria of the
early 1950s. They declared that Oppenheimer could not be trusted with America's nuclear
secrets.

In this magisterial biography twenty-five years in the making, the authors capture
Oppenheimer's life and times, from his early career to his central role in the Cold War.