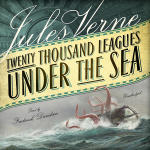 Twenty Thousand Leagues Under the Sea

The year 1866 was marked by a unique incident, a mysterious and inexplicable phenomenon, and rumors agitated the maritime population and excited the public mindespecially seafaring men. Merchants, common sailors, captains of vessels, skippers, both of Europe and America, naval officers of all countries, and the governments of several states on the two continents, were deeply interested in the matter.

For some time past, vessels had been threatened by an enormous thing: a long object, spindle-shaped, occasionally phosphorescent, and infinitely larger and more rapid in its movements than a whale. Then, Captain Nemo decided to allow his submarine, the Nautilus, to be drafted into service on a hunt ahead of its time.