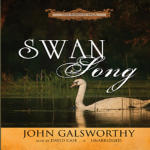 Swan Song is the sixth of the nine novels in The Forsyte
Chronicles and the conclusion of the second trilogy, called A Modern Comedy.
John Galsworthy's epic story of the moneyed Forsyte family is a fascinating
study of the British propertied class during the decline of the Victorian age.

The "man of property," Soames Forsyte, has mellowed with the passing of the
years until, in his old age, he is a patient and benign figure, guarding with especial
tenderness the welfare of his daughter, Fleur. But all his watchfulness and devotion
are powerless to avert tragedy when Fleur revives her old love affair with Jon Forsyte
on Jon's return to England with his American wife.