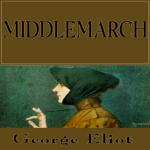 "One of the most profound, wise, and absorbing of English novelsand
above all, truthful and forgiving about human behavior."--Hermione Lee

"One of the few English novels written for grown-up people."--Virginia Woolf

"No Victorian novel approaches Middlemarch in its width of reference, its intellectual
power, or the imperturbable spaciousness of its narrative. No writer has ever represented
the ambiguities of moral choice so fully."--V. S. Pritchett

Named for the fictional community in which it is set, Middlemarch is George Eliot's
rich and teeming portrait of provincial life in Victorian England. In it, a panoply of complicated
characters attempt to carry out their destinies against the various social expectations that
accompany their class and gender.

At the center of the narrative is Dorothea Brooke, a thoughtful and idealistic young woman
determined to make a difference with her life. Enamored of a man who she believes is setting
this example, she traps herself into a loveless marriage. Her parallel is Tertius Lydgate, a
young doctor from the city whose passionate ambition to spread the new science of medicine
is complicated by his love for the wrong woman.

Epic in scope and unsurpassed in its study of human nature, Middlemarch is one of
the greatest works in all of world literature.