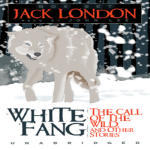 This boxed set features Jack London's thrilling classics, The Call of the Wild and White Fang.
London's adventurous nature, intuitive feeling for animal life, and superb storytelling skills have given his tales
an enduring place in the annals of American literature.

The Call of the Wild

A bold-spirited dog named Buck is stripped from his comfortable life on a California estate and thrust into the
rugged terrain of the Klondike. There he is made a sled dog and battles to become his team's leader and the
devoted servant of John Thornton, a man who shows him kindness amid the savage lawlessness of man and
beast.

In the desolate, frozen wilds of northwest Canada, a lone wolf fights the heroic daily fight for life in the wild. But
after he is captured and cruelly abused by men, he becomes a force of pure rage. Only one man sees inside
the killer to his intelligence and nobility. But can his kindness touch White Fang?