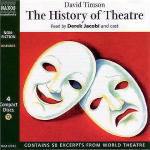 History of Theatre, The

Here is the diverse and fascinating story of the Theatre, from the first tragedies and comedies of Ancient Greece to the high-tech mega-musicals of the late 20th century. It is an absorbing tale, encompassing ancient tales, medieval theatre, Commedia dell'Arte, the great dramas of the Elizabethan age, the foppish 18th century, the European developments in France, Germany and Spain with Russia making its main impact in the 19th century. As the 20th century progressed, the theatre moved in different experimental directions, particularly in America and Europe.

Interwoven within the story are the playwrights, the actors, the designers and theorists who have kept this performing art flourishing for 2,500 years.
All this is illustrated by more than 50 excerpts from plays and contemporary accounts, ranging from the controversial and innovative to sheer entertainment.

Here is the rich variety of experience that is the Theatre.