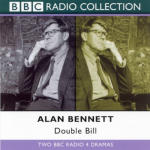 A Woman of No Importance - In this brilliant forerunner to Bennett's series of Talking Heads monologues, Patricia Routledge plays Margaret Schofield. a woman whose existence has long revolved around the gossip and minutiae of office life. As she recounts the events leading up to her first bout of tummy trouble, there is little hint of the developments ahead — or of the moving portrayal of brave and inevitable decline which writer and performer create between them.

Forty Years On - This BBC Radio 4 version of Alan Bennett's most popular stage play stars Sir John Gielgud , Paul Eddington , Bennett himself and other members of the original West End cast. Having been at Albion House for fifty years, man and boy the Headmaster is now retiring. Taking part in the end-of-term entertainment for the last time, he is outraged to find his beloved standards being mocked. A kaleidoscopic comedy, Forty Years On is part parody and part nostalgia for a fading English tradition.